Shaikh Yusuf of Makasar, a 17th century saint from the kris to the qalam

ONE of the most fascinating aspects of historical enquiry is its investigative component. And as a story-teller, it means I look for markers to contextualise events and to define personalities. There is no guarantee where you will find yourself.

As one sifts through the archaeological framework constructed by books, maps, old pictures, journals, interviews and diaries, it’s as if the fragments come to life. I call it ‘forensic biography’. Recently, I’ve been looking at Shaykh Yusuf of Makasar, an Indonesian exile, a pioneer of Cape Islam and a 17th century mujahid against Dutch imperialism.

The late Dr Achmat Davids – the doyenne of local historians trying to raise community awareness – cleverly placed him at the centre of our political struggle in 1994. This inspired the Shaykh Yusuf Tricentenary Commemorations, just weeks before the country’s first democratic elections.

However, the person who initiated local academic discourse on Shaykh Yusuf was Prof Suleiman Dangor of the University of KwaZulu Natal.  He wrote a thesis on Shaykh Yusuf in 1981, and translated his Ibn ‘Arabi influenced manuscript, the Zubdat al-Asrar (The Essence of Secrets) in 1990.

An Indonesian scholar of Shaykh Yusuf, Prof Abu Hamid of Hasanuddin University in Sulawesi, visited South Africa in 1994. And in his 2005 UNISA thesis, Shaykh Seraj Hendricks of the Azzawia in Cape Town fleshed out Shaykh Yusuf’s spiritual and academic influence.

Shaykh Yusuf – who uniquely has shrines in Colombo, Makasar and Cape Town – was born in Gowa in 1626. Legend claims that Shaykh Yusuf’s father, Abdullah, was the mystic Al-Khidr. Another more likely legend – and Shaykh Yusuf is surrounded by them – is that his wet nurses saw a light from his navel.

Shaykh Yusuf was groomed for scholarship from an early age. In his pre-teen years he was schooled in the Islamic sciences by Sayyid ba ‘Alawi ibn ‘Abdullah Tahir, and after the age of fifteen by Shaykh Jalal al-Din al-‘Aydid. Both of these scholars were from the Hadramaut in Yemen.

When he was eighteen, Shaykh Yusuf embarked upon a search for knowledge. In 1644 he landed in Aceh, where he was introduced to the Qadiriyyah Sufi Order by the paternal uncle of the famous Indonesian Shaykh, Nur ul-Din Raniri. In 1649 he landed in Yemen.

It was in Yemen that he crossed paths with Imam ‘Abdullah ibn ‘Alawi al-Haddad, the great saint of the Hadramaut and author of the Ratib ul-Haddad. According to the late Maulana Yusuf Karaan, Shaykh Yusuf met Imam ‘Abdullah in the city of Ta’iz.

In a treatise Imam al-Haddad writes the following: “…rajal min ahlul ‘ilm wa sufi yamani yusuf jawi” (a man of the fraternity of knowledge and Yemeni Sufihood, Yusuf from Java…).

Arriving in the Hijaz, Shaykh Yusuf then sat at the feet of Ibrahim al-Kurani, an expert in chains of transmission and the works of Imam al-Ghazali and Ibn ‘Arabi. Shaykh al-Kurani also accorded Shaykh Yusuf ijaza, permission to teach and guide, in the Shattariyyah Sufi Order. 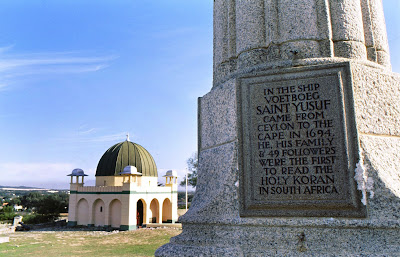 However, it was in Damascus that Shaykh Yusuf was given his most auspicious mantle, the Taj al-Khalwatiyyah (the Crown of the Khalwatiyyah Sufi Order) by the teacher in Ibn al-‘Arabi’s mosque, Shaykh ‘Abdul Barakat. The most auspicious of Shaykh Yusuf’s scholarly achievements, though, were his appointment to a kursi, or a chair of teaching, in the Makkah sanctuary – a very rare privilege.

When Shaykh Yusuf returned home in 1664 after 20 years abroad, he encountered a homeland divided by the Dutch. He settled in the court of Sultan Tirtayasa Ageng in Banten, where he became the resident scholar.

But in 1682 the bubble burst when the Sultan’s son – who’d become enamoured of the Dutch – indulged in court intrigue, jailing Shaykh Yusuf for alleged treason. In the same year Sultan Ageng was compelled to besiege the crown prince, whose pro-colonialist stance was beginning to threaten the Sultanate. The crown prince called in Dutch reinforcements to rescue him.

Forced to seek refuge in the jungle with 1,300 troops faithful to Sultan Ageng, Shaykh Yusuf managed to survive for a year, despite a heavy attrition rate. Battle weary, starving, and left with a handful of followers, Shaykh Yusuf was enticed to hand over his kris, his ceremonial dagger, when Van Happel – a Dutch officer – used his captured daughter, Asma, as bait and failed to keep his promise of freedom upon surrender.

Already regarded as a living saint, Shaykh Yusuf was a headache for the Dutch, who in 1683 exiled him to Colombo in Sri Lanka. However, when calls for his freedom began to resound from the royal families there, the Dutch dispatched him to the Cape of Good Hope in 1693. His ten years in Ceylon is an unknown chapter to us in South Africa.

En route from Ceylon to the Cape, Shaykh Yusuf displayed the saintly qualities for which he was renowned. When the fresh water supplies were exhausted on the boat, the Voetboog, it is said that after he dipped his foot into the sea, the water turned fresh.

Space precludes further commentary on Shaykh Yusuf’s time spent at the Cape. It is the topic of another article. But suffice it to say that his influence in three centres, Colombo, Banten and Cape Town, is immense.

But in Cape Town, where certain elements like to rubbish our holy flag-bearers, I wonder whether we always realise that the extraordinary man who was exiled to the Cape was not just a master of the traditional Islamic sciences, but also an authority on the mystic Ibn ‘Arabi and a Shaykh who carried the mantle of five Sufi Orders.

A giant of his time in the Muslim world, he was subjected to betrayal, treachery and unspeakable hardship and yet, remarkably, he expressed no rancour. None of his writings dwell on jihad.

In my view it is this indominatable spirit that Shaikh Yusuf brought to us; the ‘ilm ul-yaqin (the certainty of knowledge), the ‘ain ul-yaqin (the firmness of the heart) and the haq ul-yaqin (the ultimate realisation of Divine truth). And had it been any other way, Islam would never have survived at the tip of Africa.

This was published in Muslim Views, February 2017. 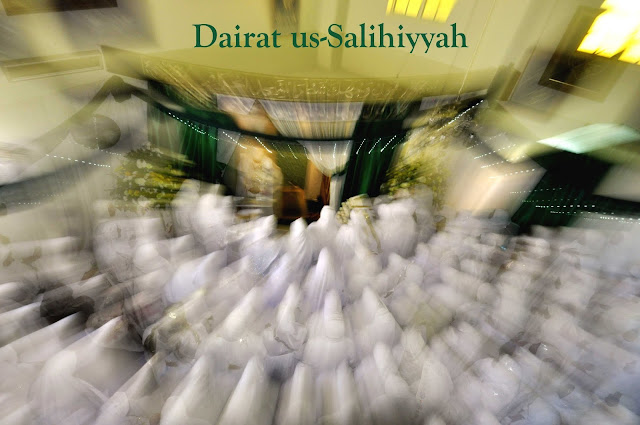 SITUATED near a taxi rank in one of Cape Town's oldest surburbs, Mowbray, masjid ul-Rashideen was built in 1891 to serve a community that would be broken up by the apartheid Group Areas Act of the 1960s. Close to the Liesbeeck River where the Koi-San once watered their cows, and with a backdrop of Devil's Peak and Table Mountain, the gentrified residential and commercial area is now highly sought after for its Victorian cottages and buildings.
For over 100 years the community has not forgotten the centrality of the mosque, although being scattered far and wide. Today, it is Somali traders and Arabic-speaking immigrants who line-up in its daily prayer rows with the broader community filling the mosque on big occasions such as the Friday prayers, Hajj classes and the two 'Eid festivals.
The mosque, which was fully renovated in 1999, is a peaceful oasis in a busy neighbourhood. It is a solid reminder of a community that refused to away, despite the ravages of apartheid.
Recently, the Dairut us-Salihiyyah Dhikr Circle held their final mawlud of the season at the mosque on a cool Saturday afternoon. The mawlud, which commemorates the life of the Prophet Muhammad, was well attended and also celebrated the birthday of Hajjah Naeema, the leader of the group. Maulana Irshaad Sedick, the guest speaker, spoke about the merits of motherhood, saying it "intimidated" him that the mosque was filled with people at whose feet would lie Paradise. 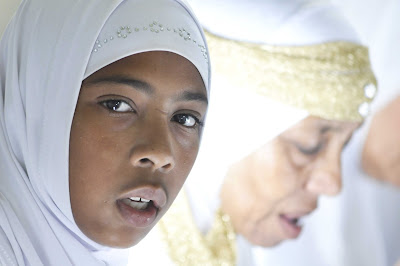 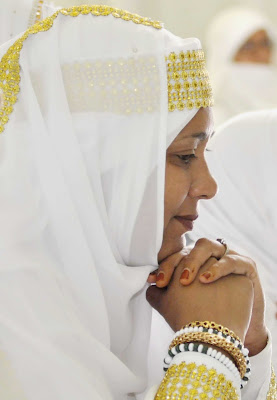 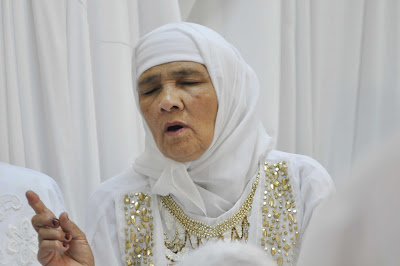 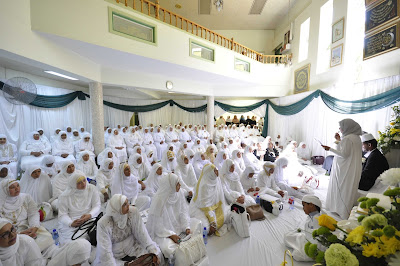 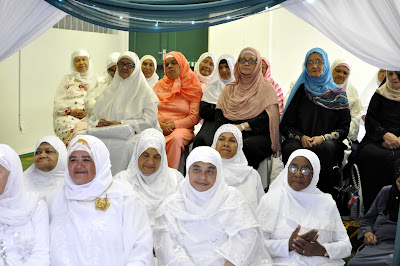 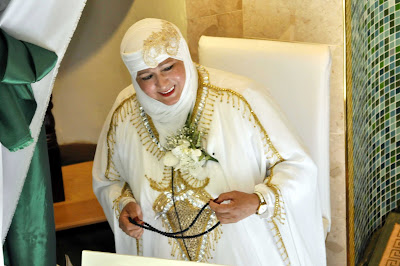 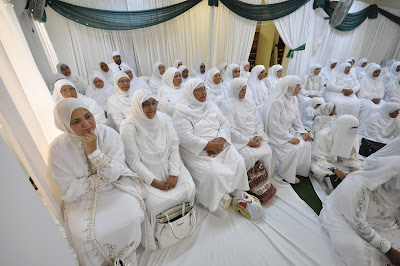 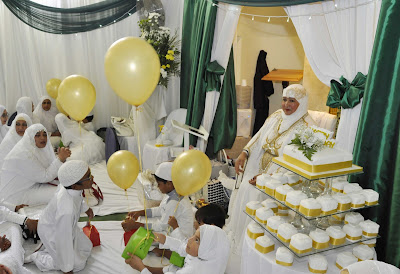 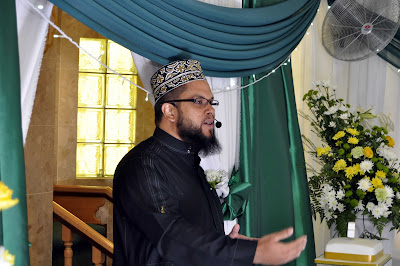 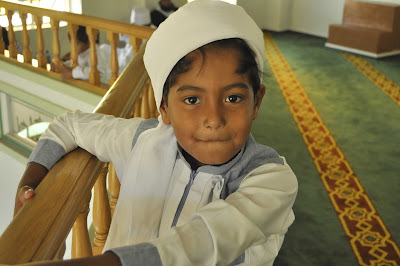 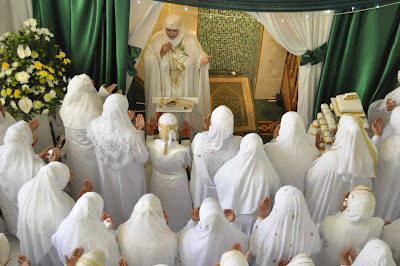 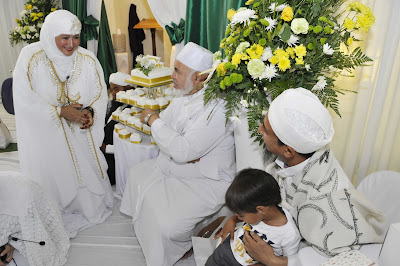 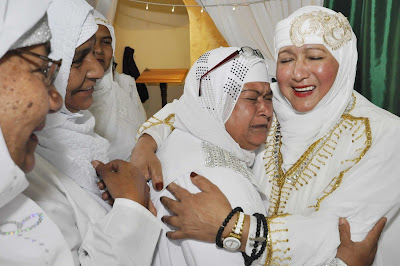 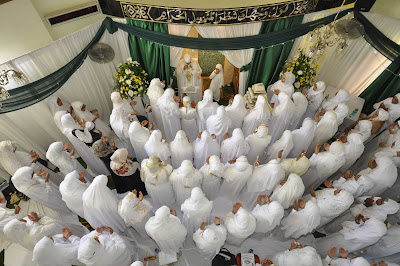 Posted by Shafiq Morton at 12:06 AM No comments: