A Drop of the Mercy Ocean 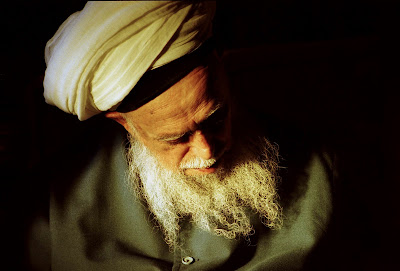 This very simple, but beautiful nasihah (piece of advice) was found written on an envelope I discovered in my files the other day. It is dated November 1997, the time when the great sage, Shaikh Naazim 'Adil al-Haqqani visited  Cape Town, South Africa.

"Beloveds....you cannot reach dunya (the material world), it will always run from you. Run after moula (Lordship) not dunya. Learn to know about your Creator, ask him [for the favours] look for the real diamond. Allah, the Almighty, said He was the Hidden Treasure, not dunya. Get to know Him, learn to ask Him from the skies reaching the Mercy Ocean. The dunya people can't find one drop in the Ocean. People in the dunya are angry. Remember, the very dirtiest level of existence is under the dunya. Tariqat (the spiritual way) calls people to reach Allah, the eternal servants of the Great Sultan...
Posted by Shafiq Morton at 2:11 AM No comments:

Mandla Mandela becomes Muslim, and the victim of unbecoming phobia and racism

LATE Saturday night (6 February) my Blackberry vibrated with urgency on my night table. Oh no, not another Zuma moment, I thought, in deference to the fact that the embattled Presidency – in the belief that bad news and political skulduggery can be diluted – now issues its press releases after deadline.

Fortunately, Number One hadn’t decided to play musical ministers, devalue the rand again or throw another Cabinet crony under the bus. It was a WhatsApp message telling me that Mandla Mandela had become Muslim. What?! I did a double take. Mandla Mandela a Muslim!

I opened the message and saw grainy cell phone images of Madiba’s elegant grandson in a Cape Town mosque. He was with the Muslim Judicial Council’s Shaikh Ebrahim Gabriels, who’d apparently just married him to a stunning young lady called Rabia Clarke. According to reports, Mandla had embraced Islam in November last year at the hands of Shaikh Riyad Walls, imam of the Stegmann Road mosque in Claremont.

Indeed, it was a pleasant change from Nkandlagate or the Days of Our Guptas, but I did wonder at the time how Mandela’s leap of faith would be interpreted and understood, not only in the Muslim community, but by all South Africans.

Another public figure, Justice John (now Yayha) Hlope had embraced Islam in April last year and married another judge, Gayaat Salie Samuels. Since then, the Hlopes had enjoyed a relatively low – and dignified – domestic profile after an initial blaze of publicity.

However, if you’re a Mandela – a Tembu chief and the grandson and nominal heir of the mighty Madiba – your DNA guarantees you media curiosity, paparazzi interest and gossip, especially if you’ve had “women” and other “troubles”.

These “troubles” have ranged from being accused of selling the media rights of Madiba’s funeral to reburying, without family permission, the remains of his three children. This caused a family rift, resulting in a court order for their bodies to be taken from Mvezo back to Qunu. It was believed that Mandla had moved the bodies in an attempt to cash in when his grandfather passed on.

If that was not enough, Mandla Mandela had had to face two charges of alleged road rage involving Amanda Liwani in 2012 and Mthatha schoolmaster, Mlamli Ngudle, in 2013. It is perhaps significant that these events coincided with a cuckolding and the consuming fury of an aggrieved, estranged first wife, whom he’d married in a civic ceremony in 2004.

A second, customary wedding to a 19 year-old from Reunion, Anais Grimaud (Nkosikazi Nobubele) in 2010, saw the increasing wrath of Tando Mabunu, his first wife, whose ire must have peaked when he took a third spouse, the Swazi princess Nodiyala Makathini, in 2011.

Inflamed by the fact he’d entered into customary marriages – and seeing a legal conflict between customary and civil matrimony in community of property – she sued for bigamy and won her case, attaching his cattle and suing for half his income on other charges of an alleged failure to pay maintenance.

To add to his woes, Mandla was to discover that his son, Qheya – named by Madiba himself – was not his, but the outcome of adultery by his own brother with Grimaud, who was sent packing to her mid Atlantic home.

Islam is not a confessional creed; to become Muslim is to earn absolution from the past. But Mandla Mandela, a very public figure, had to enter the faith with his personal baggage in full view. However, what he ultimately did belongs to his soul; it is between him and his Creator. And on that no one – absolutely no one – has the right to judge him.

But Mandla Mandela – whom I’ve heard is happily reconciled to his identity anyway – has since been the victim of some unbecoming phobia and blatant racism, which is unfortunate given the tinder-box status of racism in the country right now.

I first got to hear about this at the State of the Nation Address (from where I was broadcasting with Voice of the Cape) when our reporters came back saying that members of the crowd had booed Mandla on the red carpet.  He was with Makathini, and so I wasn’t sure whether he’d been catcalled for not having his recent wife with him, or because he’d become a Muslim.

Earlier, the Congress of Traditional Leaders of South Africa (CONTRALESA) had indicated that a Muslim could not be a clan chief. Xolile Ndevu had told the media there was a “problem” with his “Islam”. I’ve heard that CONTRALESA – who were acting unconstitutionally – did later recant, but the damage had been done: the suggestion that a Muslim man could never be an acceptable leader in traditional circles.

With Mandla this was a touch ironic, I thought. The late Hasan Ghila, who’d embraced Islam in Cape Town in the 1950s, had told me that he’d heard the adhan, the call to prayer, whilst a child in the hills of the Transkei. It was an amazing spiritual experience, he’d said, and he’d depicted it as the call of his ancestors.

I’m certainly not ascribing group superiority in any way; the point is that the primordial nature, even some ancient customs of the isiXhosa, are essentially Abrahamic. The fact that it is African is what – inexplicably – leads to a feeling of shame when the opposite should be true.

Posted by Shafiq Morton at 2:55 AM No comments: 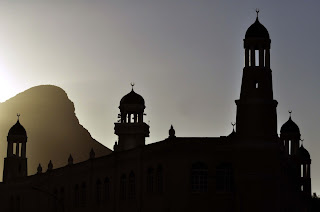 FIFTY years ago the South African apartheid government tore out the soul of Cape Town when District Six, a multi-cultural and diverse racial community, found itself being declared a "white group area". On the slopes of Devil's Peak, and but a stone's throw from the city centre, some 60,000 people were homeless at the stroke of a bureaucrat's pen.

Too soon, the bulldozers moved in and people were forced to move to the sandy ghettoes of the Cape Flats as the old Victorian facades and cobbled streets tumbled into dust. The Cape Flats were more than 20 kms from the city and were a barren, windy wasteland. The salient question is whether the community has ever recovered, so psychologically devastating is forced removal and the loss of a home. Old people died from the grief and the stress of having to move from the place of their birth.

District Six is a memory for all those who've lost their homes, wherever they may be. The few buildings not destroyed were the churches and mosques, ghostly symbols clinging to the slopes of the mountain. The following is my journey through District Six's landscape and its few surviving pockets of humanity. 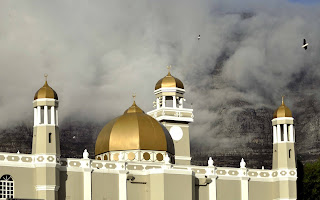 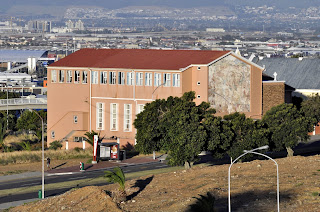 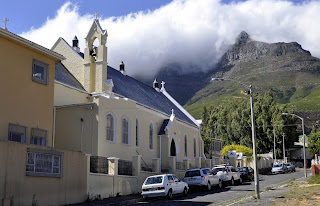 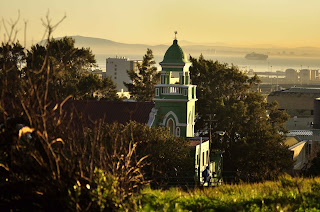 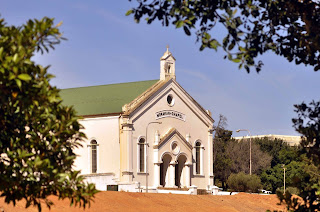 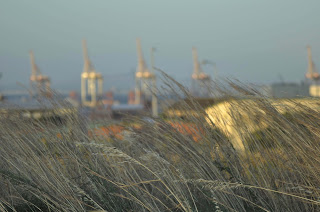 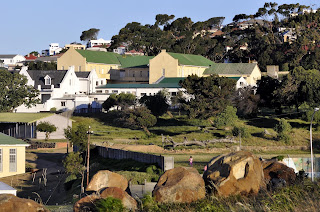 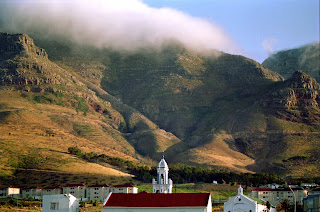 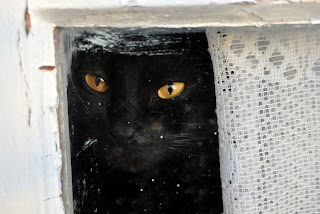 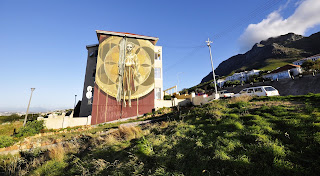 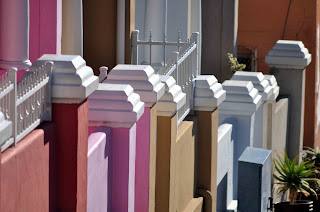 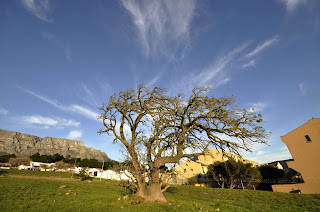 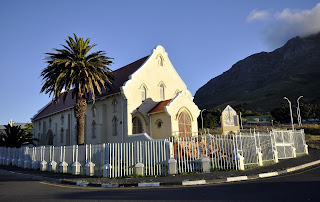 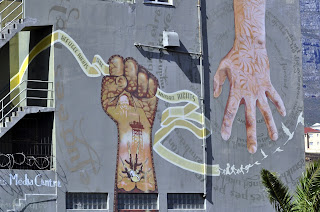 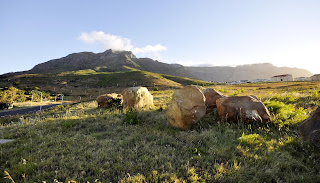 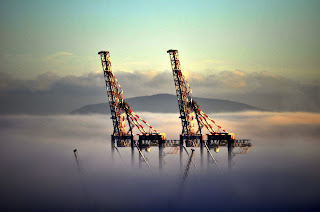 Posted by Shafiq Morton at 3:29 AM No comments: