Throwing Rocks at the Moon - The Question of Halal Water 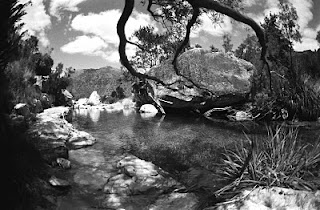 It’s getting serious. I mean really funny. Or do I mean serious? No, funny. No, serious. The pessimism of certain scholars that we’re inherently wrongdoers, and that we have to be protected from their fears, has now reached epidemic proportions in the Muslim world.

No longer can we, the silent majority, be allowed to think for ourselves. Or at least that’s the impression I get. For nowadays whenever a missionary ecclesiastic exhorts me, for instance, to avoid “strange women” I’m always tempted to ask: could it be a reflection of the preacher’s own weaknesses?

It might be anecdotal, but I work at a radio station surrounded by women. Were I to literally apply the aphorism (and literal is what these preachers want) of “lowering my gaze” I would frequently crash into the walls and fall down the stairs.

To assume the worst of human nature and their Creator, as these Islamo-evangelists usually do, reflects a distrust that is disturbing. How many times have we been told that God becomes what we think of Him, and that people become (in our suggestive minds) what we think of them too.

I have no problem with anyone assuming that I’m a good-for-nothing (I probably am). But for me to presuppose the same of someone else? I would have to regard that as arrogance on my part. For who am I to judge? And so, if anyone wants to call me “judgemental” on the issue of halal water, let’s just say: I’m protesting.

The story begins when I was travelling on the Cape Town-Johannesburg route the other day. Sitting in South African Airways economy with my knees around my ears trying to slurp gravy with a fork 30, 000 feet above Kimberly, I noticed that the toothpicks were no longer halal.

You could imagine my surprise. I’d written an article about these toothpicks (kosher on one end, halal on the other). No longer could I feel safe removing raisin residue from my teeth after consuming things such as Woolworth’s halal hot-cross buns, or the stringy chicken of my airline meal.

However, my curiosity was aroused when I ordered some sparkling water from the stewardess. After taking a few exploratory sips, something caught my eye. Not only was this water kosher, it was halal. I now took a healthy slug. I could drink this beverage with a conscience as clear as the spring from which it had gushed.

But hang on Shafiq, I thought, this was unflavoured water. Water was H²O – the sum of two oxygen atoms and one hydrogen atom. No porcine influences or impurities here. Water emanated as rain from clouds. Every droplet – traditions said – was accompanied by an Angel on its way to earth. And once on earth, it filtered through sand and rock into streamlets, springs and mighty rivers.

Absolutely baffled that doubt – or shakk – had befallen the inherent permissibility of water, I consulted the law books. What would classical application of Sacred Law tell me?

I decided to consult the Shafi’i legal stream of thought. In Cape Town we are followers of this great scholar’s school. I accessed Imam Shafi’i through the 14th century work of Shaikh Ahmad ibn Naqib al-Misri, his exposition based on the earlier 7th century interpretations of Imam Shafi’i’s pupil, Imam Nawawi.

What I learnt in summary was that 216 litres of water (two measured Iraqi barrels) did not become impure by mere contact with filth, but only so through a tangible change in taste, colour or smell. Foliage, bloodless creatures and even tea leaves (which could discolour water) did not constitute filth.

If the body of water was less than 216 litres it could become impure by contact with filth. But if indiscernible to the naked eye, and if the unobservable contact was unknown to the user of the water, it was not regarded as impure. Ignorance, scholars say, is not a sin.

I’m not a legal eagle, but if one considers that springs can produce thousands of litres a day, I struggle to see where impurities could linger. And before bottling, the water is filtered anyway – usually through reverse osmosis.

Manufacturers have to meet stringent international standards, even without halal and kosher bodies poking around their plants. Poisoning customers is not good for business.

As for the question of animal products in artificial flavourants or chemical additives: fructose, aspartame, citric acid, sodium benzoate, acesulfame K and CO² do not indicate that an unclean animal (a possible source of legal doubt) died for the cause.
So what could have the halal certification bodies been doing? If their sole purpose wasn’t to make money, which some would suggest, then their interest in bottled water can only be defined as a hair-splitting fanaticism.

Well, it is fanaticism because the very principle of Islamic law (permissible before impermissible) has been turned on its head. The reversal of this axiom in Islamic law by modern halalisers is absolutely astonishing. Everything in the world, if these zealots are to be believed, is now haram until proved halal!

In other words, following the above logic, the water bubbling out the Franchshoek escarpment in divine ecstasy was not halal until a human inspector deemed it so.

With regards to this extreme legal absurdity, it was the noble Prophet (s) who proclaimed that Islam was a powerful thing, and that if we made it difficult, it would make itself difficult for us. It seems like we’ve arrived. I wait expectantly for the day when halal bureaucrats certify the gum on postage stamps.

But the upshot of it all, and the very grave reality, is that the seeds of insecurity have been sown in the mind of the South African Muslim consumer; a consumer facing growing lists of products deemed legally doubtful. First a trickle, and now an onslaught, the sultans of halal now tyrannise the supermarket shelves.

Of course, I’m not against halal certification. It is necessary, and it has its place. But surely there should be an urgent call for balance right now? Surely reason and responsibility should be the watchwords, rather than the current culture of theological pettifogging?

A’isha, the wife of the Prophet (s), once said that if the messenger of Islam had a choice, he would always choose the easier option. And while on his final pilgrimage, the Prophet (s) told his Companions to select pebbles the size of peas for pelting the Devil, one of the symbolic rites of the Hajj.

His biggest fear, he said, was ghuluww – or extremism. He did not want Muslims to be destroyed by extremism as other nations had been done before him. And so, small stones had to be used for the pelting. This Hadith, this Prophetic saying, contains such a powerful metaphor, but its underlying message of moderation in thought and deed appears to have got lost somewhere.

And unfortunately, it seems as if certain players in the burgeoning halal industry have picked up rocks rather than pebbles, and are now throwing them – not even at the devil – but the moon.
Posted by Shafiq Morton at 6:52 AM 3 comments: