The People of the Prophet 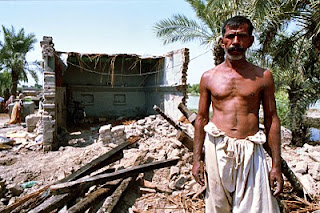 The poor will be the people of Paradise.

The Prophet Muhammad (SAW), who was born poverty-stricken – and who lived a life of poverty out of choice – made a prayer that he would be raised amongst the poor on Resurrection Day.

Of course, Islam has never scorned honourably earned wealth. The Prophet (SAW) did not see material poverty in its negative sense as a virtue. Zakah (alms tax) and sadaqah (charity) were institutions set up to redress the rich-poor divide.

And the Prophet (SAW) did exhort his Companions, in spite of his own invocation, to seek refuge from the “evils” of poverty.

However, poverty still does have a place of honour in the Islamic afterlife – especially for those placed lowest on the social ladder. The axiom is that their forbearance in the immediate realm will offer them riches in the next.

Scholars say there are two basic levels of poverty: the first is the poverty of the soul, a state of spiritual nihilism, which exists equally in the hearts of the rich and the poor. It can be the rich man pleasuring himself to death, or the poor man committing murder.

This poverty is a disconnecting of the soul from its Creator and His ethical values, and the adoption of an absolute, one-eyed materialism.

The second category is the material poverty of the body, where there is a struggle to survive or sustain oneself. This is something most of us fear. When someone in such a situation cries out for help we give. We give not only out of compassion, but because we pray that it won’t be us.

We instinctively know that stripped of the worldly comforts of shelter, clothing, food and sustenance, the faithful will have nothing but God to rely upon. And this is not a romantic notion. There can be nothing more devastating and more humbling than the loss of livelihood.

It’s for good reason, I think, that the Qur’an declares a loss of property, family or income as one of man’s greatest tests. Fortunately, through Ayyub (as), or Job, we are given hope that God, in his Infinite Mercy, will give us back what He takes away.

Over the years whilst covering a number of events such as famine, war, flood – and apartheid – I have thought a lot about the poor, because most times my stories have had to deal with the lot of the poor.

Whilst making me appreciative of what I have, it has also taught me that the human spirit is often more resilient than we think it is. That has been the most humbling lesson. My experiences – as harrowing as they’ve been – have not been about despair.

This is something that Dr Imtiaz Sooliman of Gift of the Givers aid organisation has discussed in interviews. Whilst dire circumstances can bring out the worst in human nature, it more often than not, brings out the best of human nature.

And predictably in a world where the majority of us are poor, it’s the poor who are tested the most. I’ve often thought about what I’ve seen others endure, because I don’t think I would ever be able to cope with their kind of adversity.

And perhaps that’s why I’m in the role of an observer, because Allah does promise in the Qur’an that He also won’t test us beyond our endurance. We all have our roles to play in the grand scheme of things.

But just think of the Jahalin Bedouin, chased off the land twice since the Nakba; or the 80 year old Palestinian woman, whose Jerusalem house was demolished by the Zionists. Her amazing response was that the Jews could do anything to her, but they weren’t going to shake her love for God.

I also remember the impoverished couple in a Lebanese refugee camp who’d lost their three sons in the civil war. I’d noticed their faded portraits on the wall. It was Allah’s will, they told me without bitterness when I asked them.

In the Sindh area of Pakistan – where Sufism oozes out of the soil – chivalry would come before the pangs of hunger. “Give water to my neighbour first, he’s more thirsty than me,” said one man, who himself had not eaten for days when an aid team approached him.

In the Sahel sub-Saharan country of Niger, villages had no running water and no electricity. Donkey carts were the predominant form of transport; women washed clothes in puddles and farmers placidly ploughed their fields with oxen.

The countryside was clean and unpolluted, not because of first-world environmental standards, but because the people couldn’t afford to buy goods to litter.

In one village the people were so poor the women used to share a dress to go to town. In spite of their lot, Niger’s women – like those of Pakistan and so many poor countries – are always proudly and colourfully attired.

But I think the biggest lesson I learnt from Niger was that there are people on this earth who have nothing between them and their grave except the clothes they are wearing.

In Sufistic terms these are the truly unveiled people – souls that have no other choice but to rely upon the mercy of God, and that if there is no immediate respite in the long term, it is God who knows best.

I have so many more examples: the mufti of Kosovo travelling to the United States with a plastic packet as his luggage; the sublime purity of the people of Banda Aceh; the light shining in Imam Dawud Lobi’s face in Langa; a turbaned Sudani going on pilgrimage telling me that his turban is his funeral shroud; the Pakistani mother in the Punjab with her child sheltering between her muddy legs.

In Cape Town I just have to think of the early Muslim slave runaways and the Sufi teachers such as Shaikh Nur ul-Mubeen and Tuan Sayyid Ja’far hiding in the mountains surrounding Cape Town. Thousands of kilometres from home, with no hope of ever going home, they kept their faith and left their pristine values behind when they passed on.

Nobody is poorer than a slave, but just look at their rich legacy today – a thriving Muslim community at the foot of Africa.

It is precisely this kind of scenario that drives my optimism, in spite of the pessimistic global-warming tableaus of the world crying out around us. The heedless rich may have messed up the earth, but the poor – the people of the Prophet – are those who’ve always kept it pure.
Posted by Shafiq Morton at 7:26 AM No comments: