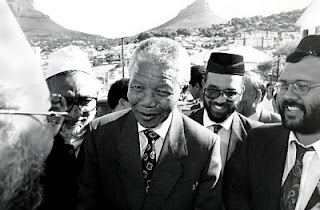 IN a world filled with acronyms and post-modernist quests for self-identity, we have to ask ourselves: what exactly is Dar ul-Shahadah?

Dar ul-Shahadah – the safe abode of Islamic witness – is a term coined by contemporary thinkers such as Professor Tariq Ramadan and Ebrahim Rasool. Ramadan, a grand-son of the Islamic Brotherhood’s Hassan al-Banna, is the most recognised voice of Muslim Europe.

Rasool, a son of the Cape Town soil and South African ambassador in the US, is a former provincial premier, parliamentarian and presidential advisor. A product of the anti-apartheid movement, he was in a group that broke away from the Muslim Youth Movement to form the Call of Islam in the 1980’s.

Directed by activists such as Faried Esack and Imam Hasan Solomon, the Call of Islam believed that South African Muslims should join the anti apartheid movement. They felt that Muslims should openly identify themselves with the objectives of the Freedom Charter.

Not everybody agreed with the Call of Islam’s integrationist principles at the time, and judging by recent events when Rasool was accosted at Gatesville mosque, there are today a confused few who still appear to have problems. But before we tackle that issue, Dar ul-Shahadah needs a little more definition.

Both Ramadan and Rasool say that as Muslim minorities in non-Muslim societies, we should have no conflict with our hyphenated existence of being Muslim-European, or Muslim-South African.

Ramadan says that European Muslims have to develop a ‘European Islam’, and Rasool asserts that as South African Muslims with a three-hundred year legacy, we can already lay claim to a distinct community profile.

For not only is Dar ul-Shahadah a safe abode of Islamic witness, it’s a space that signifies public identity and civic accountability. It’s a space where a new application of Sacred Law, the Fiqh of Minorities, shows up the exciting dynamism of Islam as it marches into the 21st century.

It’s a space where if our Islam is not threatened, and if we have civic freedoms, our responsibility is to be an upright citizen. As John Donne writes, “no man is an island”.

But being an upright, participatory Muslim citizen doesn’t mean pseudo-patriotism, two-piece suits, or agreeing with the west or supporting Israel. Nor does it mean that we have to stifle critical political engagement, or that we have to apologise for our values. Far from it.

It means that as franchised members of a society we’re an integral part of its diverse and challenging whole. We have to embrace it and become part of it. In Dar ul-Shahadah we live in a benign, as opposed to a threatening, space.

Having travelled to the Muslim world and to Europe, I can say that in South Africa we have one of the most evolved models of Dar ul-Shahadah. Our access to government and civic freedoms are the envy of all I’ve met. We’re one of the few Muslim minority communities who can actually have our destiny in our own hands.

I can remember interviewing Merve Kavakci, a Turkish MP. She was taken by the irony she could wear her scarf in South Africa’s parliamentary assembly, but not her own. Then what about Switzerland, the so-called bastion of political neutrality? Are minarets banned in the suburbs of Cape Town like they are in Zurich? And the veil? Is it forbidden in South Africa?

These are just some of the serious questions that those who tried to shout Rasool down during a Friday talk at Gatesville need to consider. The former premier, who was addressing the topic of Mandela Day, was accused of being responsible for legalising shebeens and gambling in the Western Cape.

That the accusations were as spurious as Monty Python’s dead parrot merely being asleep, need no further comment. Nor does their disgraceful conduct in the mosque. But what does need further comment is the hackneyed innuendo of state illegitimacy emanating from this group, many of whom were once associated with PAGAD.

PAGAD was founded on the principle of reducing Cape Town’s pressing problem of gangsterism and drugs. But when the masses abandoned the organisation as its leadership imploded, PAGAD became waylaid by a messianic obscurantism from which it has never recovered.

With a reactionary leadership on the ground besieged by reactionaries from within, PAGAD retreated into a “them” and “us” laager. We were either for or against PAGAD. There were no grey areas in between.

And it didn’t take too long before the association of unbelief, of being kaafir, was made on those public figures who disagreed with PAGAD’s modus operandi – murder and chaos cloaked with religiosity.

The calling of people kaafir enabled the inference that their blood was now “halal”. It manufactured consent for the bombing of the homes of people such as Shaikh Nazeem Mohamed, then president of the Muslim Judicial Council, and UCT’s Professor Ebrahim Moosa.

PAGAD’s extreme polarisation of principles (there’s only room for those Muslims who agree with them) reflects, by default, the ideas of the Egyptian polemicist, Sayyid Qutb. He wrote that there could only be a Dar ul-Islam or Dar ul-Harb, the House of Islam or the House of Hostility.

With Qutb we can immediately see the pitfalls. Where is there a genuine Dar ul-Islam today? The last Caliphate, the Ottoman one, collapsed in 1923. For most reasoned commentators Dar ul-Islam is more a hypothetical concept, but in Qutb’s eyes it’s a revolutionary reality in which jihad and the overthrow of even secular Muslim leaders is compulsory for all Muslims.

Military jihad may be relevant in Islam, but it’s certainly not one of its pillars – something that Qutb and his ilk so strongly suggest. The greater jihad, as the Prophet (s) told his Companions on the way back from a battle, is the one of the human soul.

The obvious lack of a middle road here contradicts the Qur’anic ideal of “ummatan wasatan” (the way of moderation) and the Prophet’s (s) well-known exhortations against extremism.

The grouping that attacked Rasool seem to have lost the plot of what it means to live in Dar ul-Shahadah. Do they want to impose their dictatorial, ill-formulated “Dar ul-Islam” upon all of us, no questions asked? A “Dar ul-Islam” where the blood of those who disagree with you becomes permissible? An “Islamic” system where the ends can always be twisted to justify the means?

When I think back on the infamy and terror of the PAGAD era, the alternative becomes too horrifying to contemplate.
Posted by Shafiq Morton at 6:58 AM No comments: