Israel: When the Gun Turns 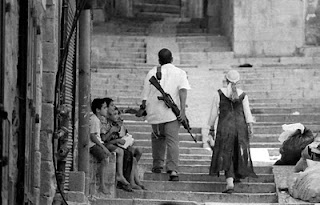 If you're a budding student of surrealism, I would recommend Israel. It will prove to be your greatest project. I can assure you that Israel's bizarre political landscape will provide you with material beyond your wildest dreams.

Described by the Oxford dictionary as an “expression of the sub-conscious mind through imagery”, surrealism communicates its meaning through absurd, irrational and capricious nonsense. It is a metaphor in which nothing is what it seems.

And if we weren’t addressing one of the modern era’s most vexing conflicts, we would all be laughing by now. For the issue of Erez Israel, the “greater” Israel, is a serious one.

For those of us who might need reminding, Israel was the political end-result of a project; a project initiated by European Jewish secularists at the end of the 1800’s to create a Jewish homeland.

Whilst this aspiration (called Zionism) was initially seen as a noble end in itself, its means – the Palestinian people being displaced at the point of a gun – has become, as Nelson Mandela once said, one of the world’s biggest unresolved questions.

This is because for its most ardent and unbending disciples, Zionism in the 21st century has morphed into a golden calf. This is why in its inviolable, idolatrous name Gaza can be bombed and besieged, and why helicopters can murder Hamas leaders from the sky.

Zionist reasoning is that if you question Zionism, you strike at the heart of a mythical, homogenous “collective Jew”. That this “collective Jew” is an emotional red-herring, and that the idol is actually nationalism – and not Judaism – should be clear to all of us.

Nationalism by definition is a blind groupthink in which morality is suspended for the sake of a greater cause – in this case, power over Palestinians who pose a threatening counter nationalism by just existing.

This idolatry of Zionist nationalism was the biggest fear of Professor Judah Magnes at Jerusalem’s Hebrew University in the 1950’s, who actively warned against Zionism becoming an idol of the Jewish people.

And as Chicago University’s Bernard Wasserstein noted almost 40 years later: Israel was founded on nationalism, and not religion. Religion, he says, only came into the Zionist frame after 1948 when Israeli nationalism had to be bolstered.

Yet it was the protagonists of this same secular ideology, atheists such as Israel’s first Prime Minister Ben Gurion, who incongruously insisted on declaring a “Jewish” (read religious) state in 1948. It was the equivalent, I was once mischievously informed, of a Mufti declaring an Islamic state in Ireland without believing in the Shari’ah.

However, Judaism as a great monotheistic faith is not the problem in the Middle East. Modern political Zionism, incapable of acknowledging its injustices and blind to its faults, thoroughly ridicules the sublime human values of Judaism. It is belligerent Zionism that opens the door to the unwelcome spectre of anti-Semitism.

Nonetheless, it is agreed now by most diplomatic players on the Levantine chess-board that Israel is a political reality. Even Hamas concedes this, although Likud’s constitution still doesn’t recognise a Palestinian state. But then again, that is just Israel.

However, as one of the world’s smallest countries with the best equipped army in the Middle East – and as the largest beneficiary of US aid – nuclear-powered Israel is a revelation of modern political science.

For how many nation-states in the 21st century can boast of four parallel legal systems within its territories?

Israel can. Israelis are governed by secular law, but issues of personal law are seen to by the Orthodox Rabbis. Israel’s parliament, the ever fractious Knesset, exists without a constitution to guide it.

So when Hebron’s xenophobic settlers indulge in their sport of harassing Palestinians, the army has to stand by. This is because I’m told it has no jurisdiction over the settlers, who are governed by civil law. Palestinians, regulated by occupational military law, are far easier to arrest.

The fourth legal system – or what’s left of it – exists in the pockets of land still governed by the Palestinian Authority.

The final anomaly is the fact that Israel is the only modern nation-state in the world today without properly defined borders. The West Bank Barrier, the Apartheid Wall, is but the most recent example of an insidious territorial creep that has consumed Palestinian land for decades.

What prompted all these thoughts was when I started going through my photo archives the other day. After several trips to the region in the last decade or so, I have an eclectic mix of images, and decided to try and sort them out.

I hadn’t seen my pictures for years, but what kept appearing in the dusty negatives were frames of people wielding guns. I wondered why I had not previously been aware of this. Image after image revealed just how many Israelis – especially radical settlers – openly carried weapons.

With 1948 Israel and 1967 Palestine so geographically compact, and with seven different climate zones and so much to see, your visit often results in a sensory overload.

Perhaps that’s why I hadn’t taken too much note of the firearms. That and the fact that we South Africans, having only just abandoned Apartheid, were still probably desensitised to political violence.

Noticeable amongst my negatives, though, was the lack of arms in the Palestinian camp. The PA’s rag-tag platoons and Hamas’s Al-Qassam Brigades could not hold a candle to Israeli firepower.

And if ever the disproportionate nature of Israel’s hostility against Palestinians was seeking for definition, here it was in my files.

So what was the point of it all? Terry Crawford-Browne, an observer for the World Council of Churches to Palestine, put it this way: the guns (and checkpoints) were there to make Palestinian life as miserable as possible.

In other words, the military’s role was not just to fend off weakling Arab regimes. The army’s job was to enforce an occupation – to execute a spider-web of laws used to justify Zionist Apartheid, and ultimately in places such as East Jerusalem, to effect ethnic cleansing.

But here lies the rub. As Zionism becomes more and more unpalatable in the post Cast Lead era, and pressure against occupation and siege starts to bear, who will the IDF listen to? The doves, or the hawks?

In recent years a host of Israeli analysts have pointed out that a right-wing settler minority has quietly worked its way into the senior ranks of the IDF. The army has been taken over by extremists, said Gush Shalom’s Uri Avnery bluntly to me in an interview last year. The beast was in the belly.

If we consider that a 2002 Ha’aretz poll revealed over 70% of Israelis would be prepared to sacrifice West Bank settlements for peace, grave problems loom for Israeli leaders. This is because there is the very real prospect of factions in the IDF ignoring official orders.

For once, Palestinians could be spectators as ill-tempered Israelis turn their guns on each other – the one party wanting peace, and the other one abjectly fearing it. Indeed, when the gun turns in Israel (on the occupied West Bank) life is really going to be interesting.
Posted by Shafiq Morton at 5:48 AM 1 comment: